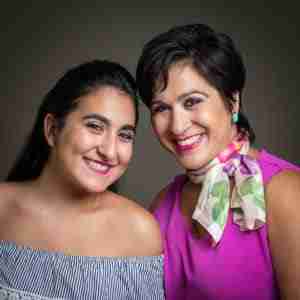 Co-written by a mother/daughter team: Demetra Tsavaris-Lecourezos and Katerina Lecourezos.

Cancer in My Family is narrated by a 14-year-old girl who has been surrounded by cancer most of her young life. Her goal is to help educate others (people, young and old) about what she has experienced and learned along the way.

Other Books by Demetra Tsavaris-Lecourezos

Letters from Around the World: Learning the Greek Alphabet

Over the past decade, Demetra has served as caretaker to both her late mother, and late-husband; mother to Katerina; “Momager;” business owner; designer; cancer patient; and renowned author.

All of Demetra’s previous books in her Young World Travelers “reference library” have focused on world travel for kids in the form of “EDU-TAINMENT.” Demetra never allowed her bout with cancer to interfere with living, writing, and raising Katerina. Cancer in My Family was a way to bond with Katerina, to help educate her, and to provide an easy reference guide to better health from the perspective of Katerina’s experiences.

Demetra is a member of Society of Children’s Book Writers and Illustrators and a 5-Star recipient from Readers’ Favorite.

To request an author appearance by Demetra for book signings, storytelling, and author talks, email ywtbooks@gmail.com

Though Katerina is always proud to share that she was born in Manhattan, she spent her younger years in Queens, and after the passing of her dad, she and her mom moved to the hometown of her grandparents, Tarpon Springs, Florida.

At just eleven years old, she was already planning her future, which including attending UCLA to major in film-making. The acting/film industry has been her passion ever since. At age fourteen, she auditioned for and was accepted to attend Pinellas County Center for the Arts at Gibbs High School, where she currently attends as a ninth-grader.

During her years at Tarpon Middle School, she was in their Women’s Chamber Chorus, elected vice president of the Student Council, was historian for Future Business Leaders of America, and was inducted into the National Junior Honor Society. Additionally, as a World War II history buff, her individual performance on Pearl Harbor earned its way to state level for National History Day.

Katerina has attended the Tampa Bay Performing Arts Academy (for musical theater) for the past seven years and has been on their Competition Team for the past two years. This year, she played Ms. Hannigan in Annie and won an award for Excellence in Voice.

She has trained for voice and drama at Ruth Eckerd Hall-Marcia P. Hoffman School of the Arts and at Straz Center, Patel Conservatory for voice and theater. The St. Pete Opera accepted her to perform in their Christmas performance, Seasonal Sparkle. Katerina is also a member of the choir and Byzantine choir at her church, where she has also performed as a soloist. She is fluent in Greek and is a performer with the Levendia Greek Folk Dance Troupe.

Katerina participated in Industry Network’s showcase in Los Angeles, where she came in “top 10” (of 500 talents) for her voice-over and improv, auditioned for agents, and ultimately became agent-represented. She has since modeled and filmed in seven featured films, one TV movie, six short films, and a web series. Katerina is a member of Women in Film and Television, and of the Tampa Bay Film Society.
She is very involved in her community and volunteers with a number of organizations and events.