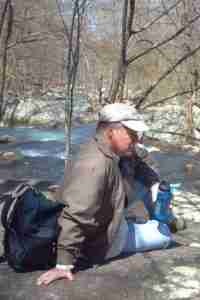 Rick Sanders has been creating art since he was a child, and he got his first camera when he was only seven years old. He earned a master’s degree in art education in 1985, which led him to become proficient in a variety of media in order to teach art. He has taught students from preschools to colleges and adult education. His two great loves as an artist are oil painting and photography, but he also excels in pastels, pen-and-ink, charcoal, colored-pencil drawing, and mixed media.

He has shown his work across the United States and is an award-winning artist. Copies of his artwork have been distributed worldwide.

Rick has written for years and has several novels under his belt with thewordverve. Now he also uses his imagination to paint pictures with words.

Pick up a paperback copy of his books on this site: Strange Times in Yeehaw Junction, The Walking Bridge, and The Darkest Place. They are also available via your favorite book retailer in paperback or digital formats.

See below for examples of Rick's magical artistry.

See below for examples of Rick's magical artistry.